A Cute Little Witch Costume made from an upcycled sweater, complete with a sweet headband witch hat! 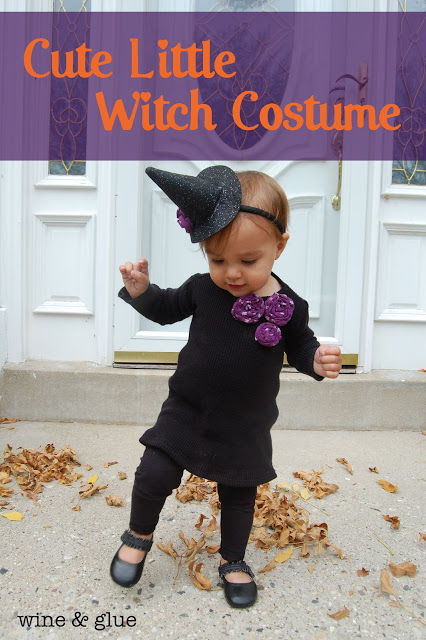 Quinny is going as a Cute Little Witch for Halloween.

Which is really perfect, given how cute she is. 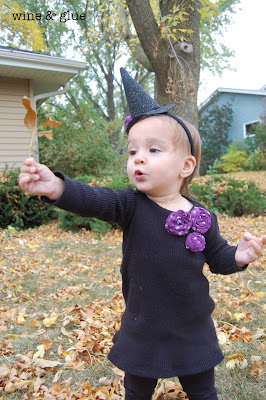 And how mischievous she is. 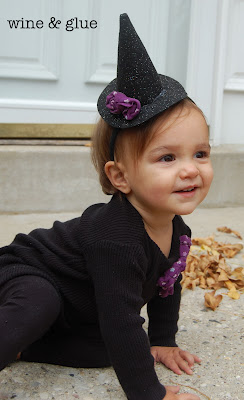 Her dress is made from an old sweater of mine that was a little ill fitting and has been in a box in a closet in a spare bedroom  . . . pretty much since we moved into this house. And as soon as I saw this amazing post from Ashley at Make it Love it (is there anything that woman can’t do??), my Cute Little Witch dreams started to become a reality. 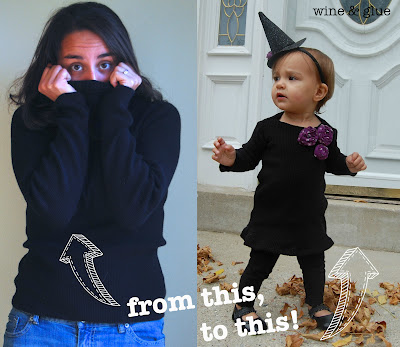 And while the sweater was frumpy on me, it was perfect for little Quinn. Though there was some altering to be done to get it there. 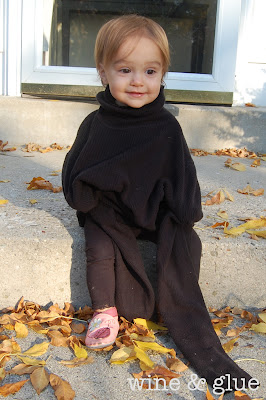 She’s so cute I could just eat her.

Ashley’s got the instructions over on Make it, Love it. But I will give you two pieces of advice. The first is that if you have a sweater dress already that fits your kiddo, use that as a guide.

My other piece of advice is that if you are a novice seamstress (like me), you might want to consider sewing the sleeves with the wrong side of the dress out (so the whole thing is turned inside out), but the sleeve is tucked inside the dress with the right sides up against each other. Does that make sense? It makes it a lot less bulky when sewing it on. Now. It is highly likely that you have read this little tip ALL over the internet, but I’m kind of a fly the seat of my pants novice seamstress, and I like to learn as I go. All the same, I have to say that the dress turned out rather well for me considering I’ve never sewn on sleeves before and this is the first time I worked with a thick knit. See the way the dress ruffles at the bottom? That was totally intentional. {Insert giant, exaggerated wink here.} 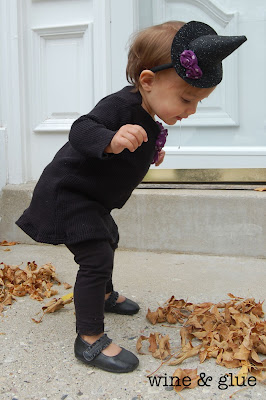 For the flowers on the dress and the hat, I used another Make it, Love it tutorial. This one for some shirred fabric flowers. I used some scrap fabric from some leggings that had seen better days, and just hand stitched them on the dress and hot glued them on to the hat. 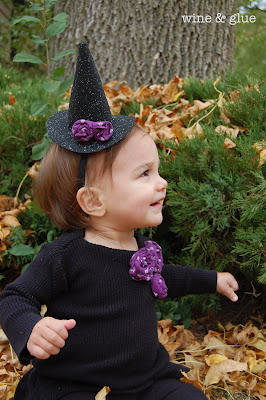 I’m maybe most proud of her hat. The cuteness of it sort of makes me want to burst. I had seen similar hats at Michaels and Target, but their price tags made me shudder a little. (Ok, they were only like $10. But for a tiny witch hat?? That she may or may not wear for a total of three minutes?? I couldn’t do it.)

These are really simple to make, and better yet, they cost about $2. Start with a sparkly piece of felt (a dollar at Michaels). 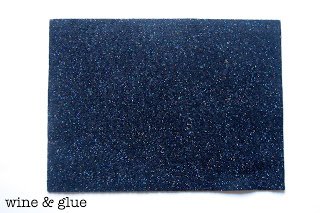 Fold it over on itself diagonally. 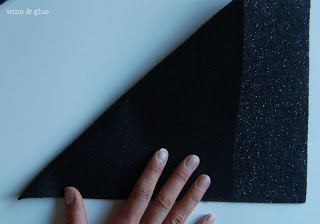 Now cut on a curve to make a cone (about five inches down). 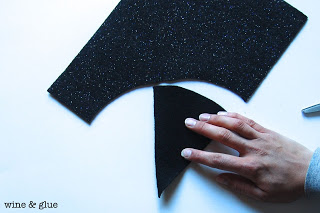 Sew the cone together, making sure to backstitch at the beginning and end. You could always hot glue it too, just make sure that it is dry before you move on. 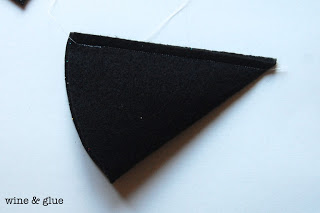 Cut off the very tip. 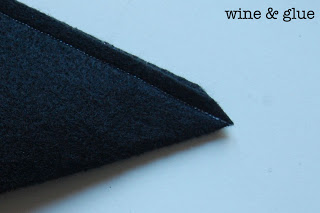 Now fold it sparkly side out, using your scissors to get that last little pointy tip of the hat out. 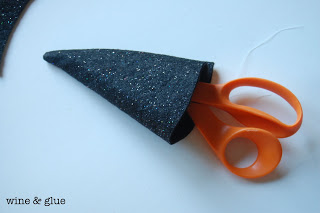 Now cut a 5 inch (in diameter) circle. I like to use my olfa but you could always just use something round and trace. Giant can of tomatoes? Bottom of the coffee can? Oatmeal canister? You get the idea.

Then cut another 1 1/4 inch hole in the middle. It doesn’t have to be perfect. It’s going to be hidden. 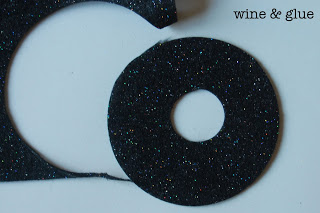 Now cut short 1/4 inch cuts along the bottom of the hat’s cone. 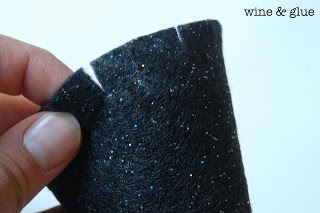 Here comes the tricky part. Add a dab of hot glue to the corner of one of those little tabs, and fold it over. Now fold down the one next to it, gluing the corners together. Keep doing that around the base of the cone. I say tricky part because I burned myself with hot glue approximately 800 times while doing this. Can you say fabric glue? 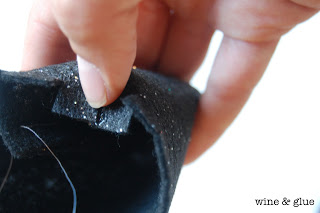 It will make a relatively flat base that you can then add glue to. 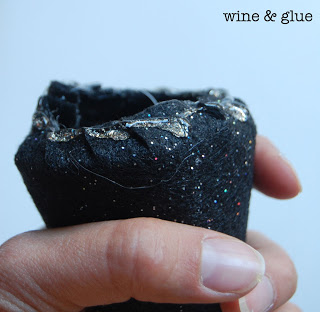 And connect to the circle, to make a brim to your hat. 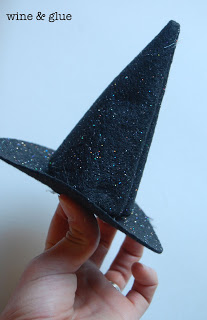 Now fill the hat with some polyfil. I had some, but if you don’t, and you’d rather not add this expense, the felt is stiff enough that it will still work. 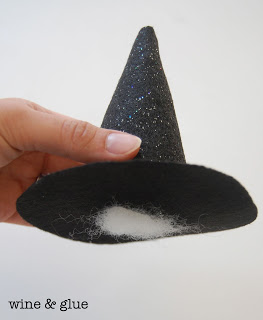 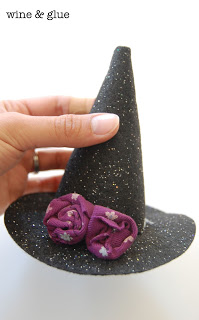 Then glue the headband to the bottom, and add another piece of the felt over that. 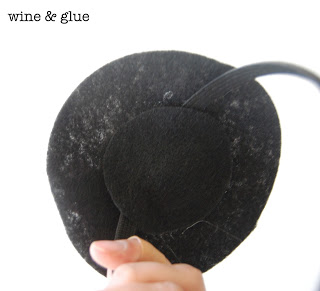 Now put it on your cute little witch. 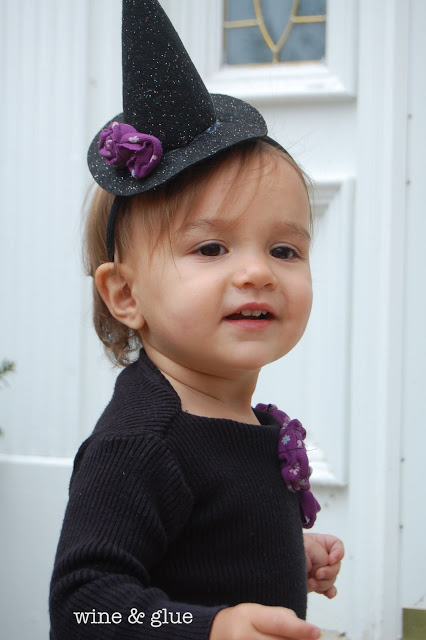