Pumpkin Pie Dip is so simple to throw together and absolutely perfect with these Cinnamon Sugar Pie Crust Dippers!

Over the weekend we celebrated Nathan’s birthday . . . . you know that moment when you have been married for like 72 years and gone through ALL the hard stuff together and then all the average stuff that makes you crazy (like kids who won’t listen, schedules that are too busy, relatives who make you bang your head into a wall) . . . . and then you go out for dinner and you are magically transported back to when you first fell in love?

That’s kind of why I love date nights.

It’s like somehow getting out of the house helps you leave all that other stuff behind and you sit across the table from this great looking person that you sort of forgot you liked for a minute. It’s amazing. I swear. Babysitting money is the best money I spend.

I love Nathan’s birthday because I get to celebrate this really awesome person being born, but I also love it because it is in faaalllll! Fall happens to be the time of year when Nathan and I first fell in love. It’s magical. The air starting to turn crisp, the leaves starting to turn, and then you just want to bake things with apple and turn everything into pumpkin flavored something.

So I made you some Pumpkin Pie Dip! And then, because I really really love you, I made you some cinnamon sugar pie crust dippers to go with it. They are bananas, you guys, so so so good! I went with a pre made pie crust, because that makes it easier, but you could totally make them with my Fool Proof Pie Crust.

This pumpkin pie dip is made with pumpkin, so I sort of feel like we can call it healthy. Yes? I left out the cool whip on this dip because I wanted it to be more creamy than fluffy, and stuck with using some cream cheese. It absolutely does not disappoint. It legitimately tastes like pumpkin pie, and it is super easy to throw together. 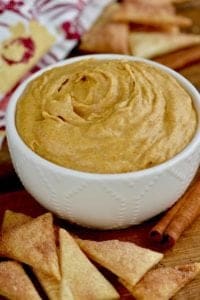