These Pumpkin Brownies are about to blow your mind and become your new favorite pumpkin dessert! They aren’t pumpkin brownies from scratch, but because of how they are made, they are a million times better! Easy and delicious, does it get any better than that? These fantastic brownies are based off my Mint Chocolate Brownies that always get rave reviews and people begging for the recipe! 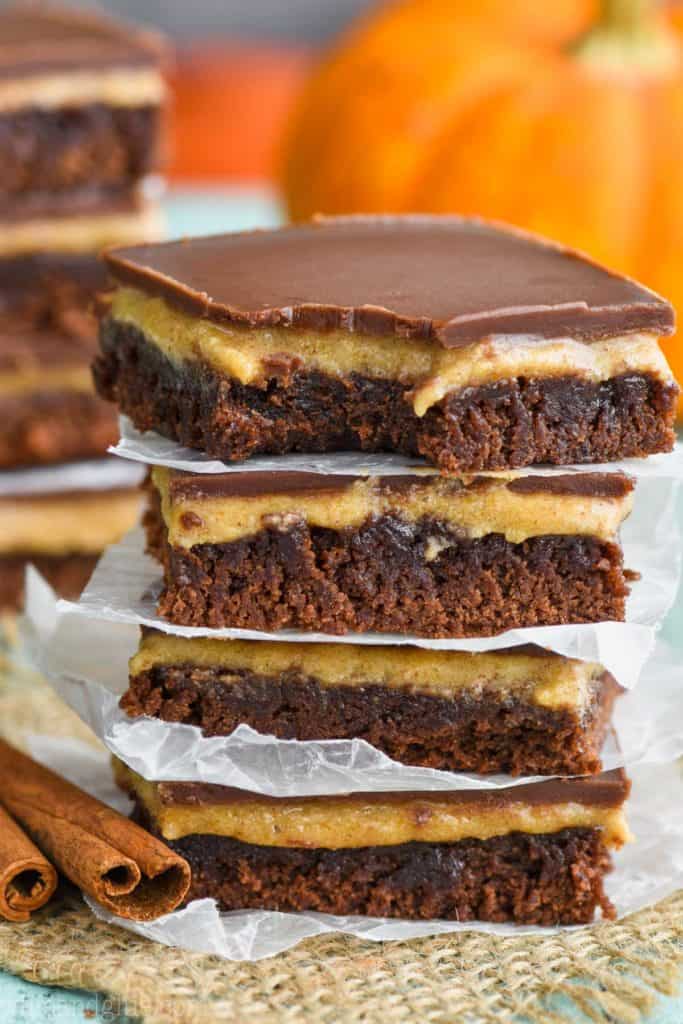 Happy Monday guys!! I was just talking on Instagram this morning how much better I like Monady mornings than the weekend because I’m an absolute and total weirdo. ???? For real though, our weekend was JAM PACKED! Saturday Gavin did his first ever cyclocross race (it’s like a cross between the road racing you see in Tour de France and mountain biking). And Quinn had her first soccer game. I’m not going to lie . . . I suddenly totally understand those parents who get in screaming matches on the sidelines. I for sure had to tell myself to chill. As fun as our weekend was, I think I am a nerd who loves routine. So Monday mornings and getting back in the swing of things might be my jam.

And I have a new recipe for you that isn’t a dinner recipe or a cocktail! I feel like that’s the first time in a while, right friends? Maybe the last one was my Watergate Cake. Maybe not. Either way, I’m so excited to bring you THE BEST Pumpkin Brownie Recipe! I’m obsessed with transforming my favorite desserts into pumpkin desserts. Like when I made the Perfect Sugar Cookie Recipe into Pumpkin Sugar Cookies. So now, my Mint Chocolate Brownies are becoming Pumpkin Chocolate Brownies. Hooray! 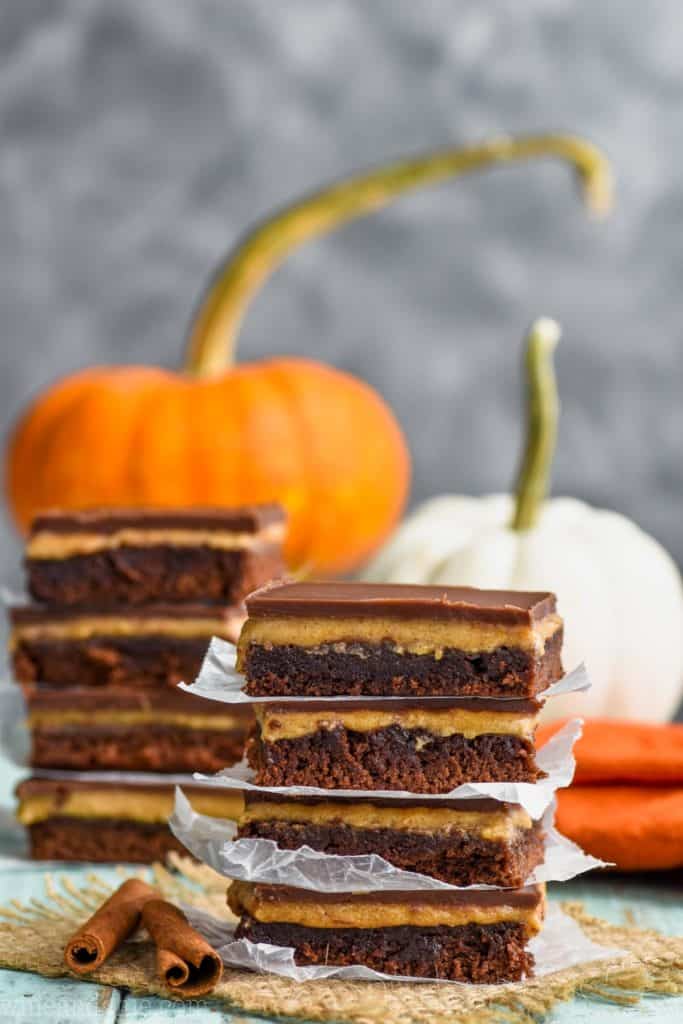 HOW TO MAKE PUMPKIN BROWNIES

These Pumpkin Brownies took a few tries to get right! I knew I wanted them to look like the brownies you see in this post, but I wanted them to be super pumpkin-ey, so at first I started with a 2 ingredient pumpkin brownies recipe. You guys . . . I wanted to love it, but I just didn’t. The brownies came out just fine, but they were way too chewy for me. So, I decided to focus my pumpkin love on the cream layer, and it was the right call, my friends.

That is it my friends. Super easy.

TIPS AND TRICKS FOR THIS PUMPKIN CHOCOLATE BROWNIE RECIPE 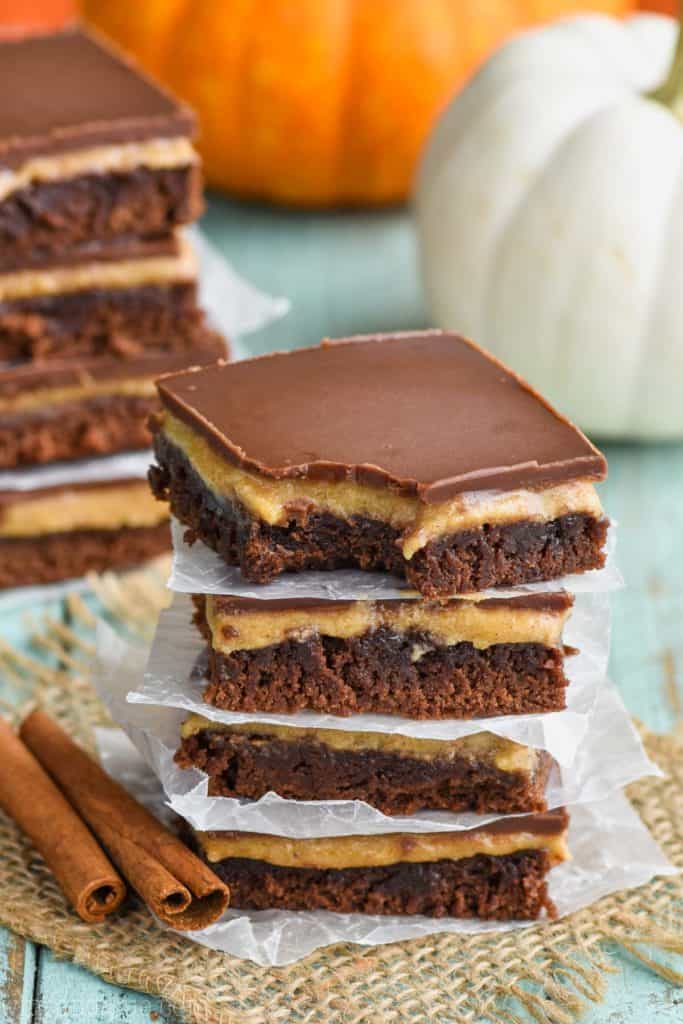 If you are in search of more great pumpkin desserts, you must first make the Pumpkin Sugar Cookies that I listed above. After that, I really think you should make my Perfect Pumpkin Pie. It is a for sure brag, but it actually is super perfect. Next you need to make this super easy Apple Pumpkin Dump Cake. It is in fact the easiest dessert, but you will be shocked at how perfectly apples and pumpkins go together. It’s like they know they are both the stars of fall.

From there, make sure you make this roasted banana pumpkin bread.  The photos on that one totally have me drooling! And then you need to make these Nutella Pumpkin Swirled Bars. They look like a match made in heaven. Finally, this Baked Pumpkin French Toast looks like my dream breakfast! 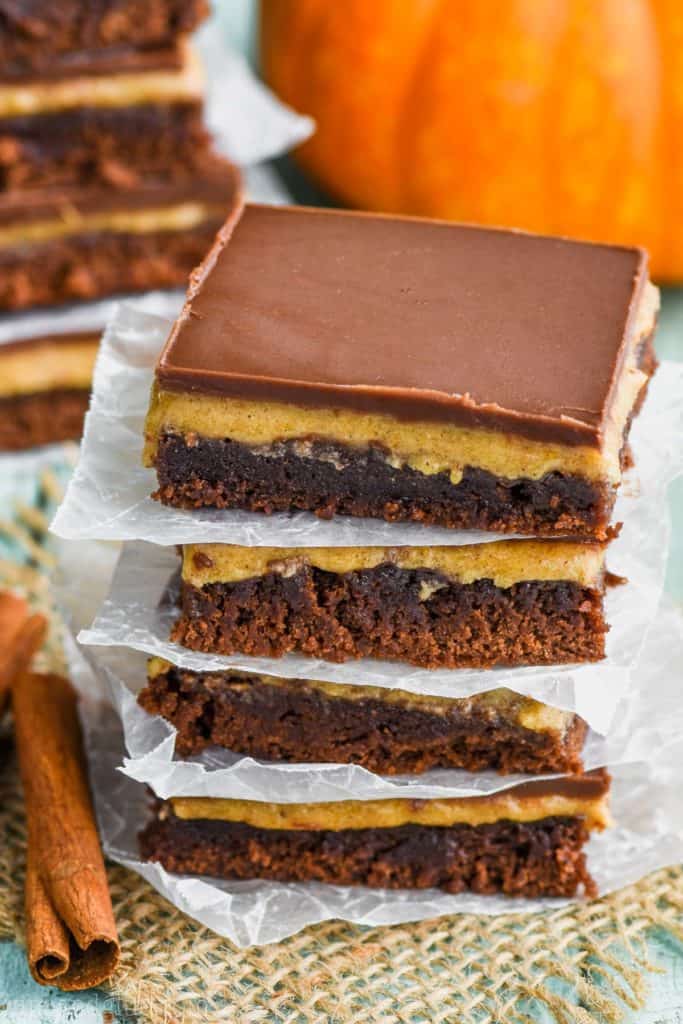 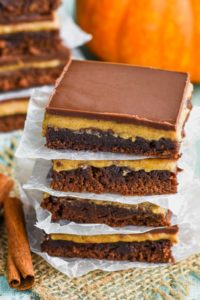 Serves: 24 brownies
(tap # to scale)
Prep: 20 minutes
Cook: 40 minutes
Total: 1 hour
These Pumpkin Brownies are about to blow your mind and become your new favorite pumpkin dessert!  They aren't pumpkin brownies from scratch, but because of how they are made, they are a million times better!  Easy and delicious, does it get any better than that?
print pin it rate

Other great recipes for fall I know you will love 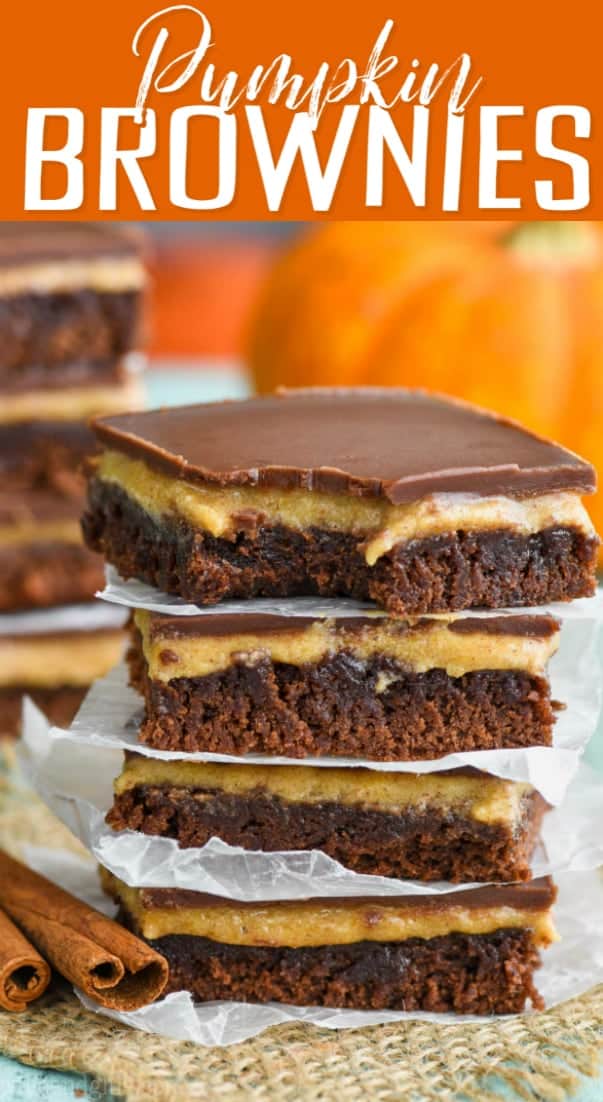