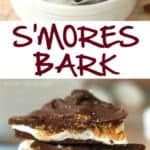 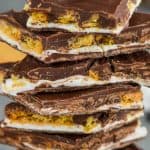 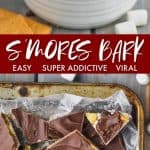 S’mores Chocolate Bark is a yummy inside-out s’mores treat that you don’t even need a campfire for!

Happy Monday, friends! I got a full work out in yesterday and a full 9 (NINE!!!) hours of sleep and I am feeling like a new woman! I even went for a five mile run this morning. It’s amazing what the little things in life can do for your spirit. Fresh air, blood moving, and good sleep – nothing like it.

I am thrilled, because this morning I am giving you an updated version of one of my favorite recipes on the blog! S’mores Chocolate Bark. If you have been following me for more than a year, you know that I love desserts that are so easy you can do them in your sleep. Don’t get  me wrong, I love from scratch desserts like my Caramel Apple Cobbler recipe. But there is something so amazing about a dessert you can give away that took you less than a half hour to make – you know, like my easy Fireball Fudge recipe.

Chocolate Bark recipes are exactly like that. They are so super easy to make, simple to make great variations on, and even easier to eat.

What is Chocolate Bark?

Chocolate Bark is really just melted chocolate spread over a pan with something added into it or on it and then broken up when it dries. Probably the most famous and popular chocolate bark recipe is Chocolate Peppermint Bark that you make at the holidays. I’m sure you’ve seen it.

How do you Make Chocolate Bark S’mores Flavored?

The key to making this recipe taste like a nice gooey s’mores right out of the fire pit is combining those quintessential flavors of chocolate, marshmallow and graham crackers. Obviously the marshmallow had to stay in the middle.

And there you have it my friends. S’mores in a neat chocolate bark package. No flames necessary.

For a detailed look at how to make this recipe, don’t miss the video below.

Can you Freeze this Chocolate Bark?

Yes! S’mores bark can be frozen, which is great news! Because then maybe you will space out when you eat it and not hoover it all up in one sitting. Not that I have any experience with that.

How Long Does Chocolate Bark Last?

Ummm, in my personal experience? A day. Just kidding! This s’mores bark will keep in an airtight container on your counter for two weeks. You do not need to refrigerate it.

Other Spins on S’mores

If you just can’t get enough of that s’mores goodness, check out these other twists. 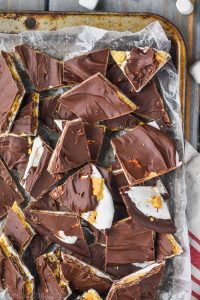 Serves: 50 pieces
(tap # to scale)
Prep: 20 minutes
Total: 20 minutes
S’mores Chocolate Bark is a yummy, amazing inside out s’mores that you don’t even need a camp fire for!  Chocolate Bark is my favorite thing to make because it is so easy and the possibilities are endless!
print pin it rate

I’d love to see what you made! Tag me @lisasimplejoy and hashtag it #simplejoyrecipes!
you'll also like 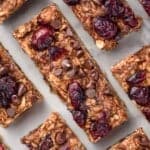 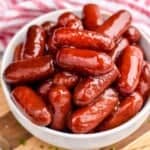 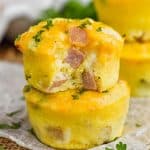