These Strawberry Blueberry Yogurt Pops are so perfect for summer and so easy to make! 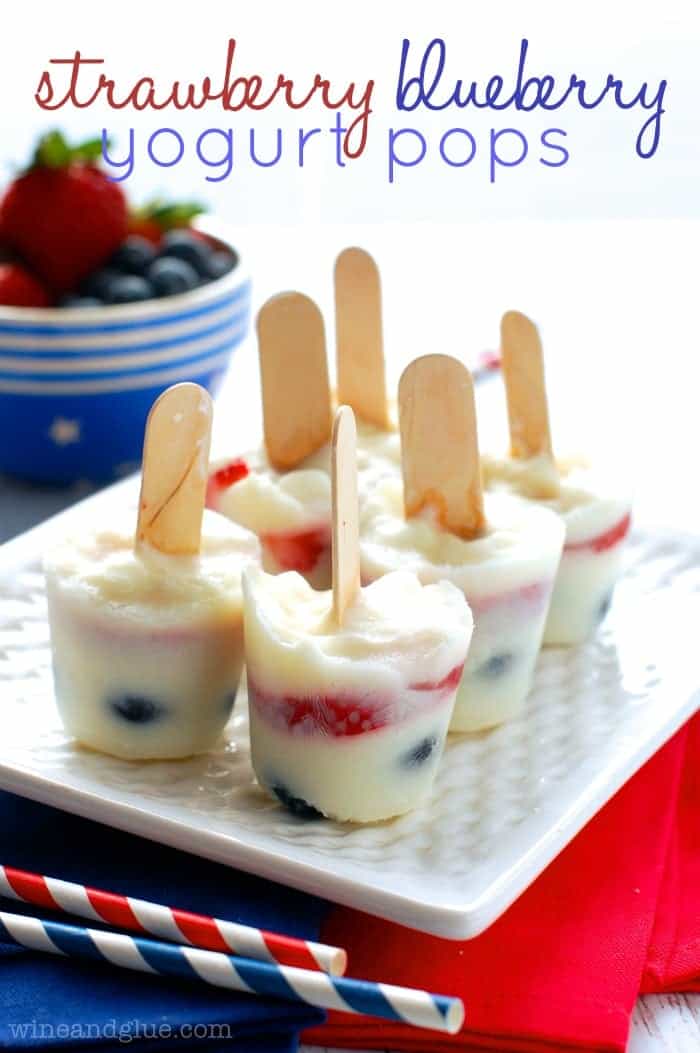 It was sometime after Christmas vacation that it came to my attention that I was raising a monster. A beast really.

A little creature who was so lovable in one minute and then snarly teeth and drooling mouth the next. Disturbing really.

{Dear future Gavin who can read and surf the internet, I’m totally talking about you. I love you.} 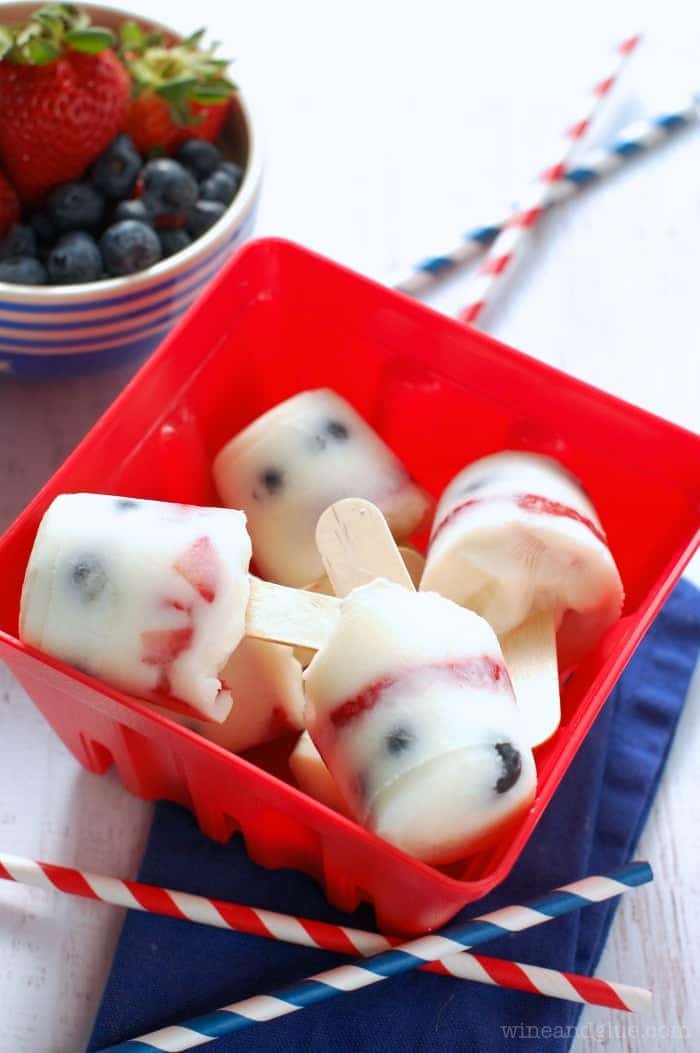 Everyday it was kind of the same routine. I would wake Quinn up from her nap to go rush and pick Gavin up from school. Within minutes of him coming home, he would be causing all sorts of problems and making Quinn and I (who had been so harmonious before picking him up) nearly cry.  Okay to be fair to Gavin we had been harmonious because one of us had been napping, and sometimes we were near tears because one of us was two and the other of us was two people in one.

It took me a few weeks to realize that the kid NEEDED food. Go figure. Kids. You’ve got to like feed them and stuff.

He was ravenous after school. He could eat a huge snack and then also eat a huge dinner. It was CRAZY. So immediately upon picking him up I would hand him a snack in the car, and then have a big glass of milk and more snack waiting for him at home.

His favorite snack is fruit. Which, I think is great, but honestly, the kid needs some protein. He doesn’t like yogurt, and I can’t really blame him. There is something about it on its own that sort of makes me want to gag. BUT! He loves it frozen. Like the tubes of yogurt you get the store, pop those in the freezer, and I’ve got some happy kiddos. 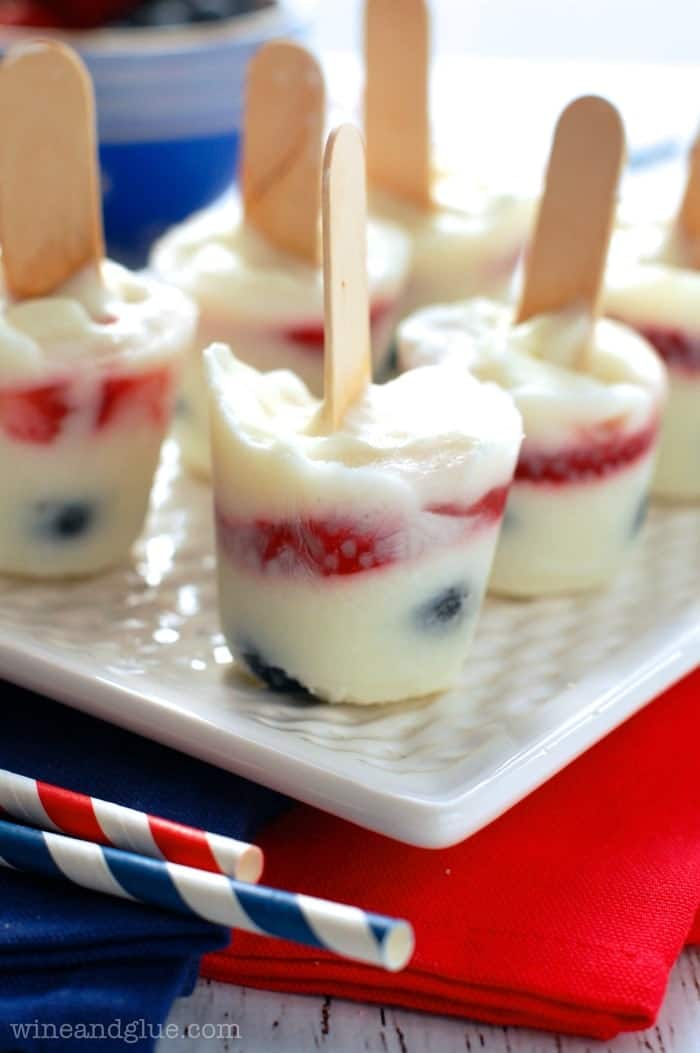 So that’s the idea behind this snack. Some fresh fruit, combined with some yogurt, and you’ve got a yummy little snack disguised as a treat pop! And, a little side bonus? They are red, white, and blue! So this year, when my kids are snarfing down candy after the Fourth of July parade, I can hand them some of these as well.

I made you a handy dandy little graphic about putting them together, but really it’s pretty self explanatory. A little vanilla yogurt in the bottom of a small paper cup, some blueberries, a little more yogurt, a sliced strawberry (or diced), with a slit down the middle that conveniently holds the popsicle stick cut in half, and topped off with a little more yogurt. Pop them in a mini muffin tin to hold them all upright, and then throw them in the freezer overnight. Perfect, right? 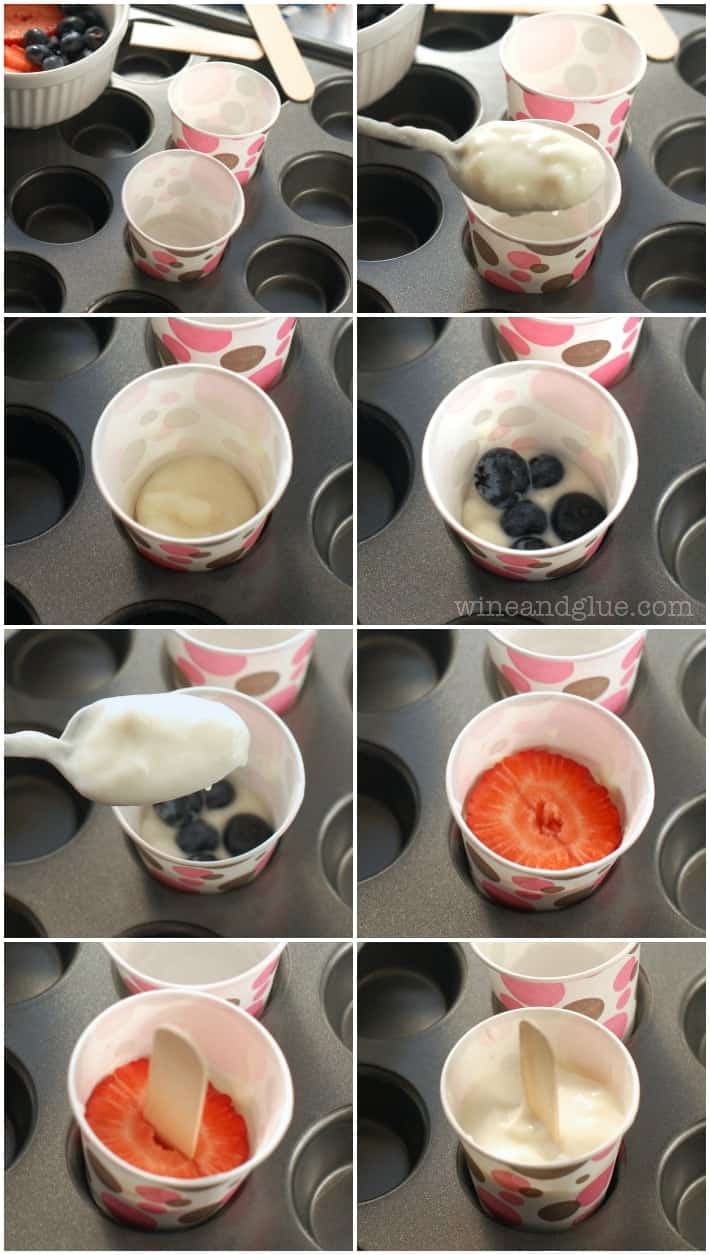