These Taco Stuffed Peppers are such an easy weeknight dinner that are packed with flavor! They are going to become a regular on your family’s menu! These make such a well rounded dinner that you can just serve them on their own. Make these for Taco Tuesday and top them with some corn salsa or guacamole! 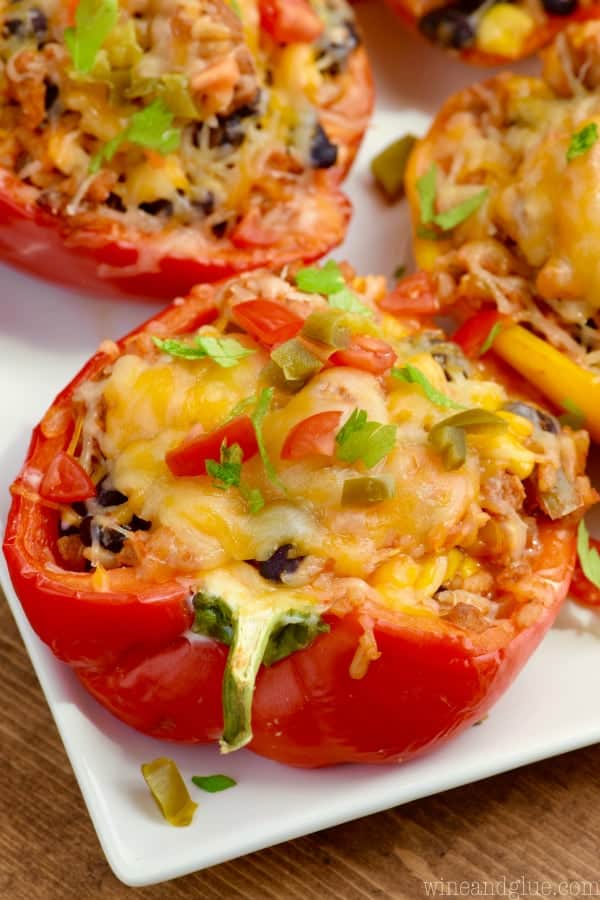 I’m so happy to be partnering with Horizon to bring you this awesome weeknight meal!

You guuuuuuuuuuuys. A week from Thursday my kids start school. A week.from.Thursday. SO SOON! I am a total jumble of emotions this year as they are starting school. The kids are starting a new school this year, which makes life all sorts of complicated. They are nervous, and I am doing my best to not show them that I’m SUPER nervous. Like way more nervous than they are. Before I know it I’m going to be having my repetitive high school dream that I don’t remember my locker combination and I forgot to study for my English exam. ???? 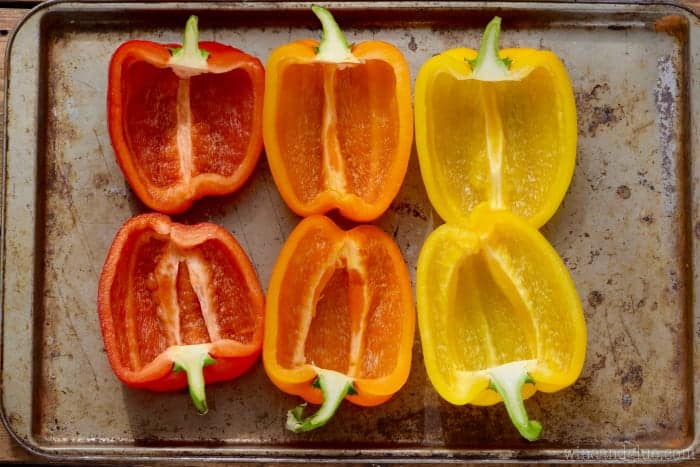 Anyway! In the middle of all the prep that goes into a new school year (especially this school year), I am totally thinking about what all the easy dinners are that I can have on hand to make life more simple as things get super complicated with back to school. 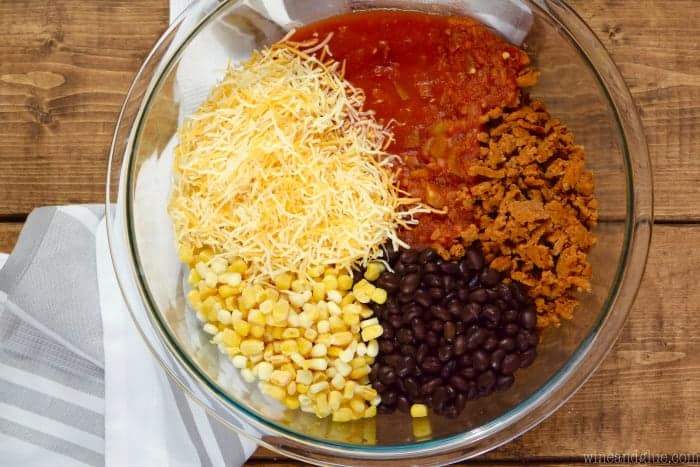 And these Taco Stuffed Peppers made with Horizon Mexican Shredded Cheese are a totally perfect back to school meal. It is basically throwing a bunch of things together in a big bowl, and then tossing it in peppers. What makes this such a quick easy meal is the microwavable rice – a genius idea found in my friend Phi’s new book . . . . rice that I totally forgot to include in the above picture . . . #oops! 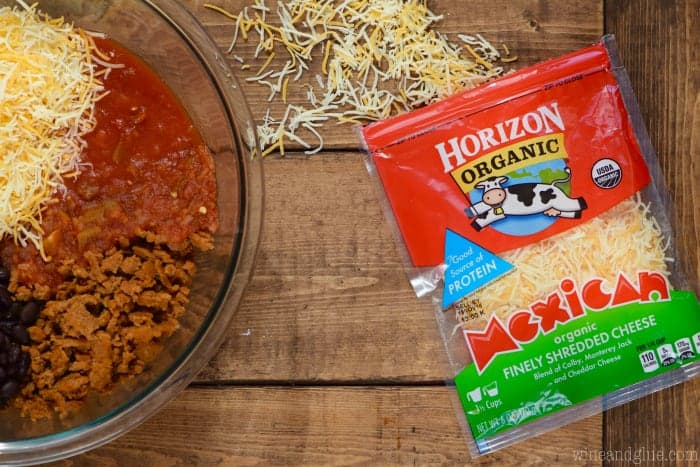 You add some of the Horizon Mexican Shredded Cheese to the mixture but then you also add a big handful to the top of the peppers at the very end of baking. It makes the peppers absolutely perfect! We love having Horizon Organic products on hand. Their Mac N Cheese is a staple in our house, and we love their milk. But their cheese and sour cream are what put this dinner over the top! 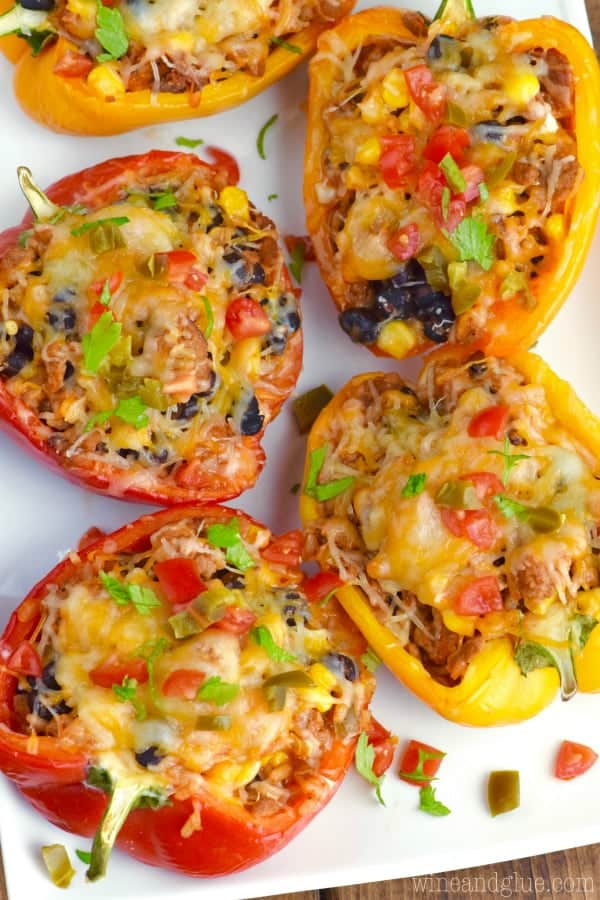 The peppers are great as is, but I loved jazzing them up with some Horizon Sour Cream on top. It makes them extra delicious! 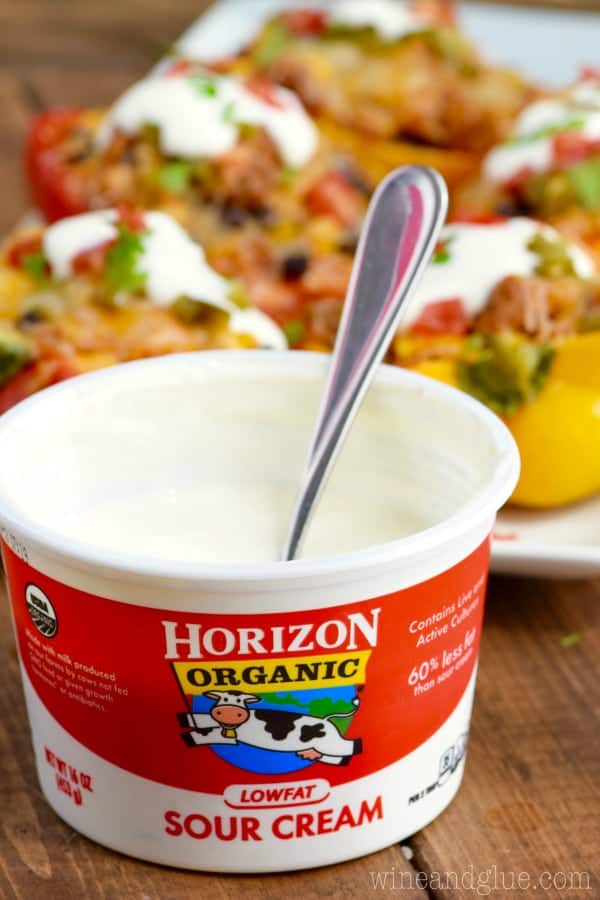 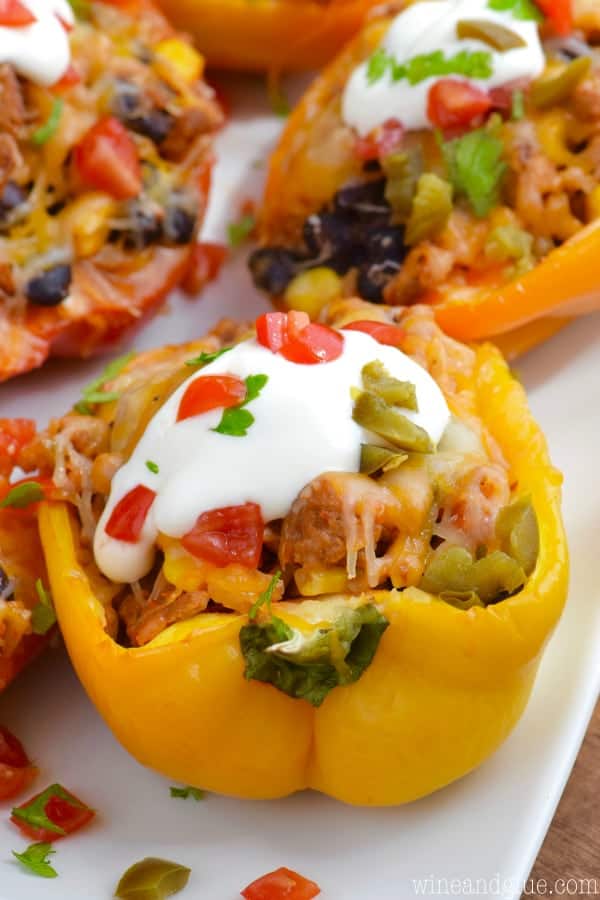 If you don’t want to serve all 8 peppers at once, you can easily freeze this. Before baking, stick them on a pan and put them in the freezer for an hour. Once flash frozen, take them out and put them in individual plastic bags. Stick the bag under cold water with the opening above the surface. This will push all the air out of the bag and then while it is still submerged you can seal it (just don’t let any water in the bag). Then throw the individually sealed peppers in the freezer. Store up to two months. When ready to bake, thaw in the refrigerator overnight and bake as directed! (See photo and video below for more details.) 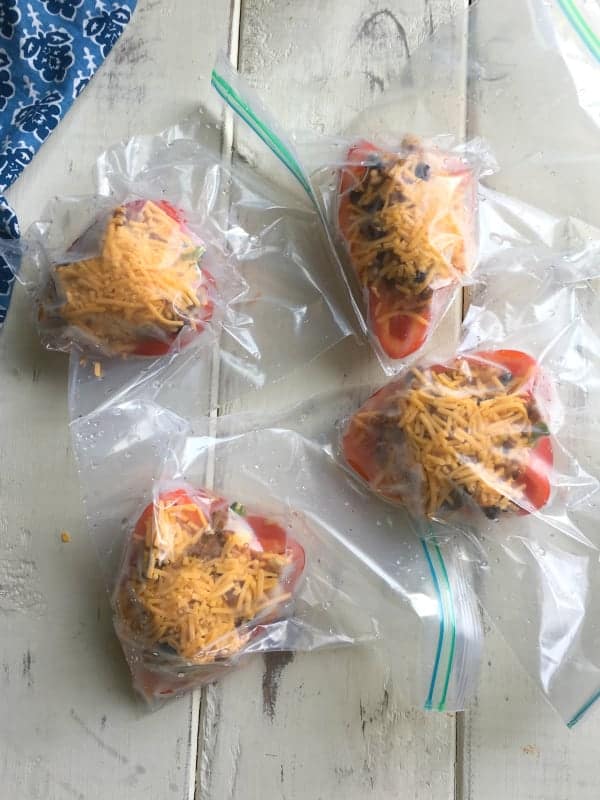 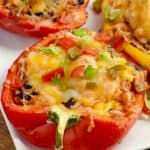 You can also just cut the tops off of the four peppers and make four BIG peppers rather than 8 half peppers. 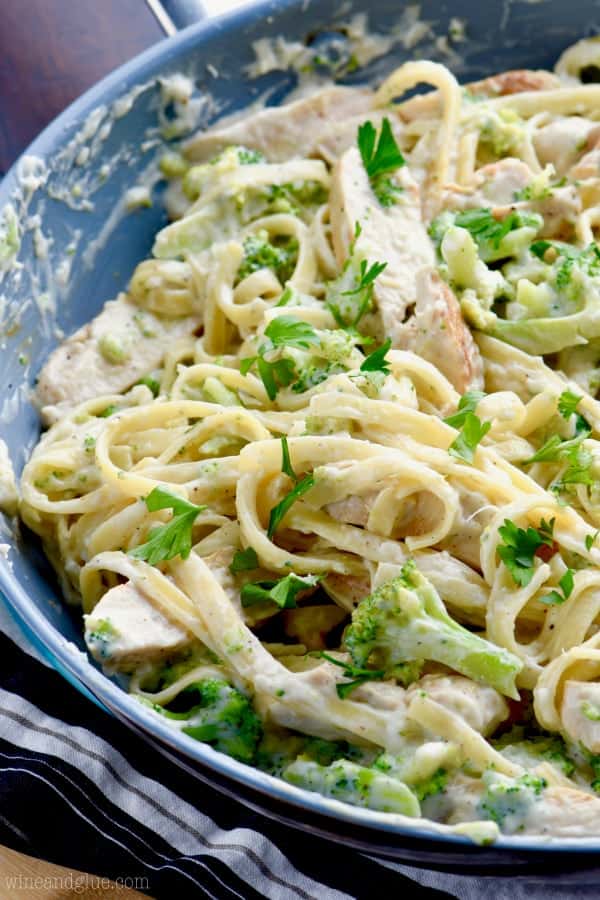 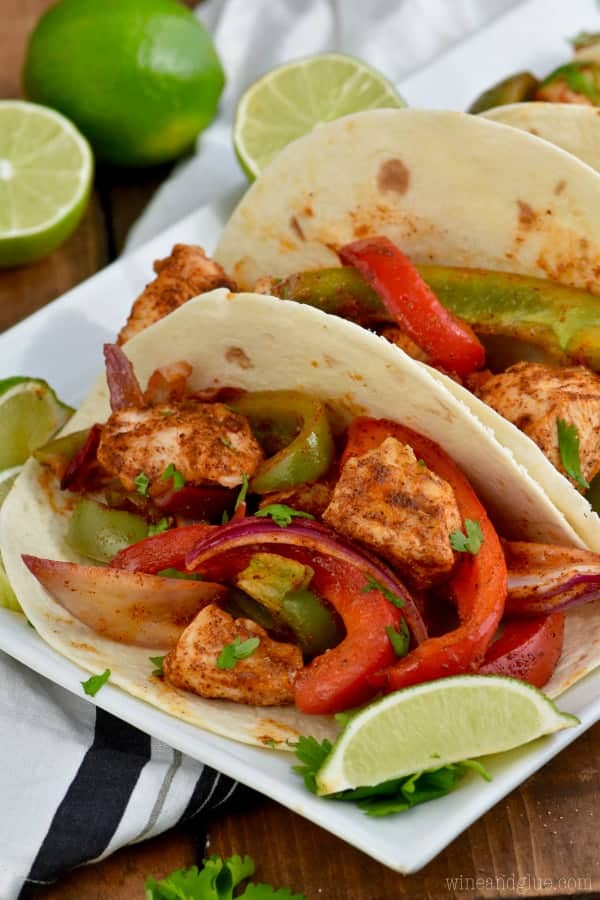 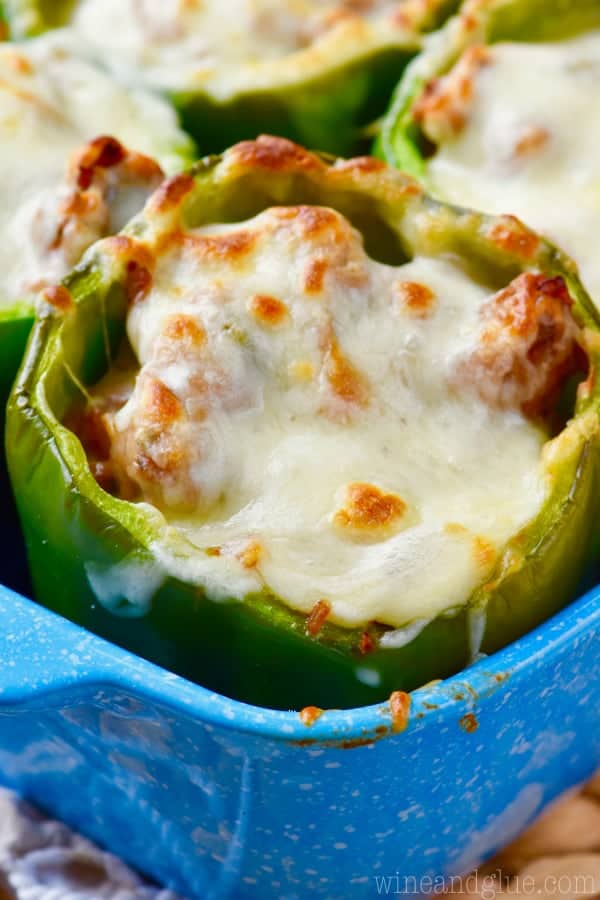 This is a sponsored conversation written by me on behalf of Horizon Organic. The opinions and text are all mine. 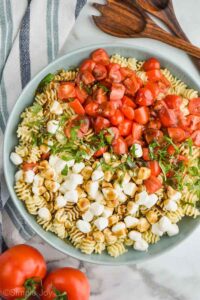 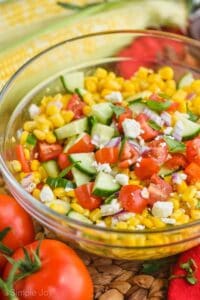 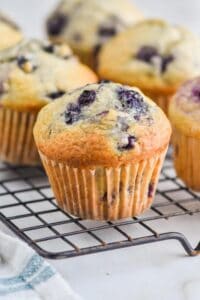 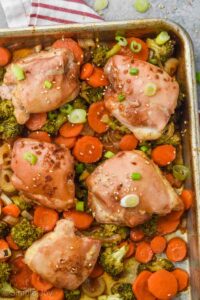 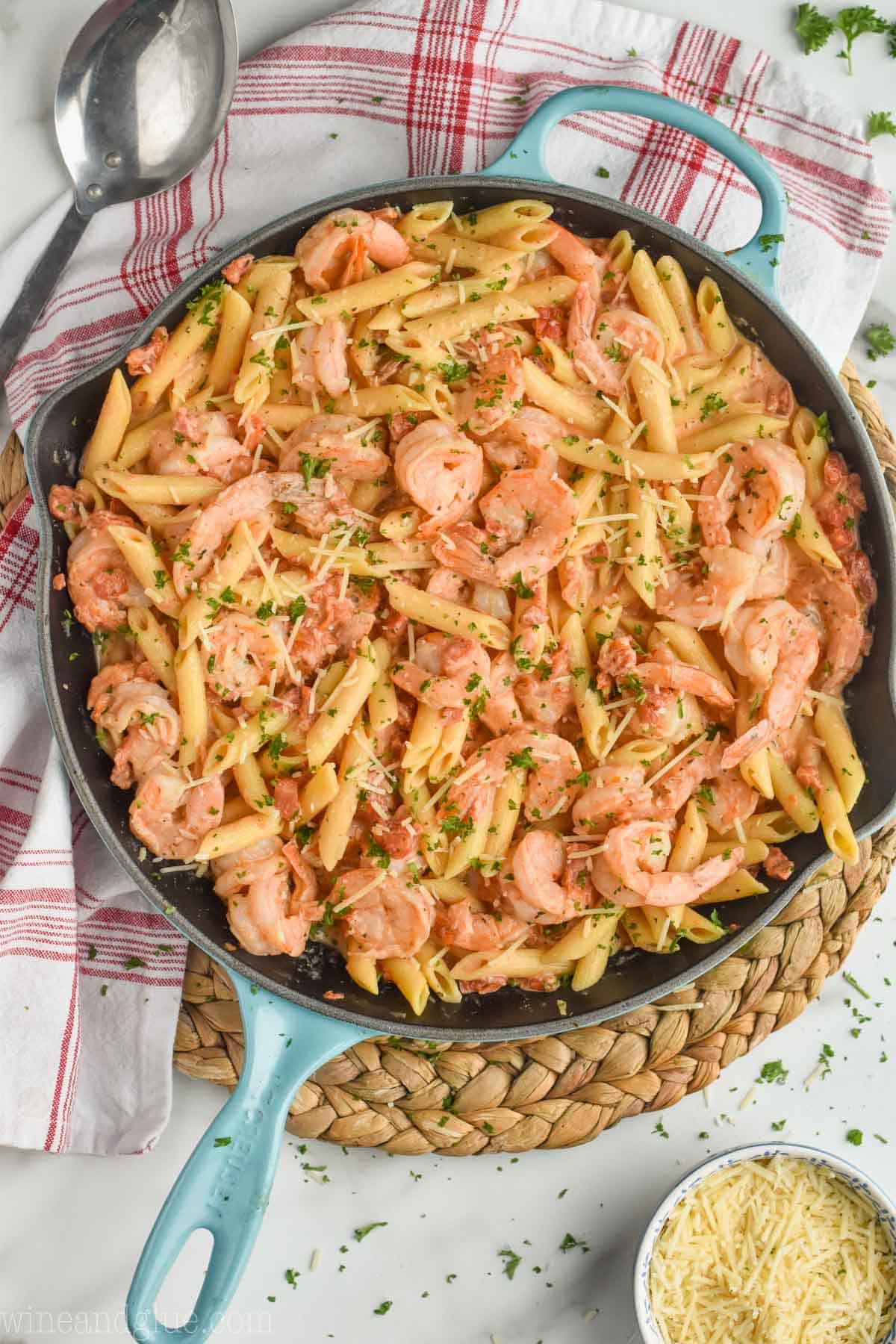