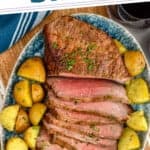 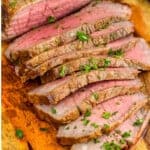 London Broil Marinade is easy to throw together and is perfect for making a tender London Broil recipe. You will want to hang on to this recipe for the perfect Sunday night dinners.

Our family just got home from vacation and we are immediately jumping back into life, kid activities, and getting everyone ready for back to school. But the thing at the forefront of my mind? Family dinners.

When our family’s life gets crazy beyond belief, I feel like family dinners are the thing that bring us back to center and help us reconnect and check in with each other. To make family dinners happen, we need a thick binder full of easy dinner recipes that we can whip together in a snap and that everyone loves.

This London Broil recipe absolutely fits the bill. It is tender, has an easy simple flavor that even the pickiest eater will like, and it can be marinated the night before, making it easy to throw in the oven after you get home from work.

What is London Broil

London Broil actually refers to the method of cooking a roast and not the particular cut of meat. It involves marinating a piece of meat, then broiling and roasting it – as we are doing here.

Most butchers today use top round to make a London Broil. That being said, I have seen some pieces of meat at the grocery store actually labeled “London Broil.” Those are fine to buy for this recipe, otherwise, I would recommend looking for Top Round.

We stuck with very simple ingredients for this marinade. For the full list of measurements, please see the recipe card below.

If you are looking to play around with this recipe, I would suggest adding some of the following.

How long should you marinate beef?

The old adage that the longer you marinate meat the better it is just isn’t quite true. We recommend marinating beef for 6 to 24 hours. Longer than 24 hours and the beef will start to break down too much. This is a great recipe to start the night before you want to have it. You can pop it in the oven when you get home from work.

How to Cook London Broil

We are making London Broil in the oven, and it could not be easier.

Whenever you are cooking a large piece of meat, an instant read thermometer is your best friend. Cuts of meat vary so much in thickness that it is really hard to give you a time that will work for the exact doneness you are looking for.

Instead, I highly recommend investing in an instant read thermometer, that way you can start checking your meat early on (poke it as many times as you want!) to get the exact temperature and doneness that your family is looking for. Taking it out at 125 is great if you like a tender and medium rare piece like you see here.

This is the instant read thermometer that I use in my kitchen.

Are London Broil and Top Round the same?

Can London Broil be cooked in the crock pot?

Technically, it wouldn’t be a London Broil anymore because you aren’t broiling and roasting it, but you can absolutely make this recipe in the crockpot. I recommend removing it from the marinade, putting it in a 450 degree oven for 15 minutes and then transferring it to a slow cooker fit with a rack on low for 6 hours.

How much London Broil per person?

What to Serve with London Broil

If you make this London Broil Marinade or any of our recipes, leave a comment and let us know what you think! 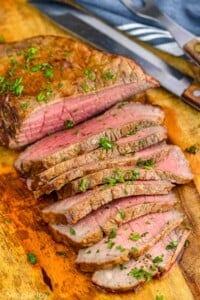 Serves: 6 people
(tap # to scale)
Prep: 5 minutes
Cook: 1 hour 15 minutes
Total: 7 hours 20 minutes
London Broil Marinade is easy to throw together and is perfect for making a tender London Broil recipe. You will want to hang on to this recipe for the perfect Sunday night dinners.
print pin it rate 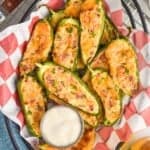