I’m kind of in denial, but my little girl is TWO today!!

I can barely believe that we have gone from that sleepy newborn stage to a little girl who loves to give her family hugs and kisses, dance wildly, and has a smile that could melt the polar ice caps in what feels like a week and a half.

In the last year, Quinn has gone from a toddler who had more similarities to an American who speaks exclusively English traveling alone in Germany to this sassy spunky little two year old with a rich and wonderful sense of humor.

Very often people who have babies after losing a child call that next baby their “Rainbow Baby.” I cringe a little at that description, because I would never want anyone to describe Elliot as a storm. He was nothing but warm rays of sunshine in my life. But the wake of his death? Yes, that was a storm. Quinn’s pregnancy? That was a storm. Constantly wondering if she would be okay. Trying to imagine her being born into this world safe and sound and seeing nothing but darkness when I tried to imagine her safe passage into our lives.

But when Quinn was born, literally the moment after she was born, the clouds parted for me and she was my rainbow. My mind was put at ease, and I felt at peace with this little life.

And so Quinny is my rainbow. The rainbow at the end of that stormy time in my life. {Hence the giant Rainbow Party last year.}

So what better cake to celebrate than a rainbow cake??

This rainbow cake roll idea came to me in that odd state between fully awake and fully asleep around the Fourth of July. I was actually thinking of a red, white, and blue cake roll in addition to a rainbow cake roll and seriously woke up the next morning to see this amazing Patriotic Cake Roll from Crazy for Crust.

Dorothy is the Queen when it comes to cake rolls. I, foolishly, tried to do this Rainbow Cake Roll with a box cake mix . . . twice . . . before just going with Dorothy’s flawless recipe and instructions. In fact, one of her most recent cake rolls, the Zucchini Cake Roll with Chocolate Cream Cheese Filling, has an amazing set of rules/tips to follow when doing a cake roll. You must check it out. To see all of Dorothy’s Cake Rolls, click here.

Meanwhile, Happy Birthday Sweet Pea!! I love you my little rainbow. You light up my life! 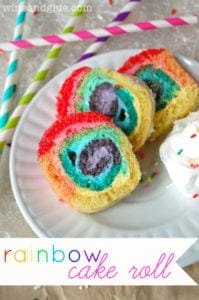 To Make the Frosting

To Construct the Cake