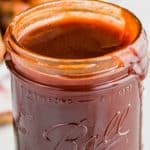 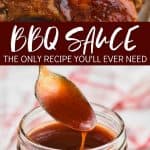 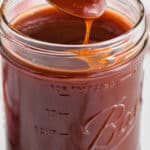 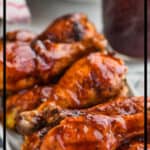 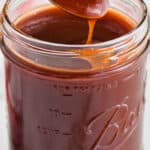 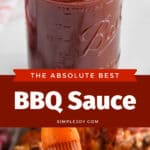 This BBQ Sauce Recipe is easy to throw together and absolutely delicious! Fast to make and with ingredients you already have on hand, you are going to make this homemade bbq sauce all the time.

Pair this BBQ sauce recipe with my Chicken Rub for the perfect grilled bbq chicken.

The other day, I shared with my my Chicken Rub recipe, which is a great dry rub that makes chicken on the grill so flavorful. And if you wanted to stop with just that, you absolutely could. But! If you don’t, I have for you this amazing homemade bbq sauce that compliments the rub perfectly. Made with ingredients that I bet you already have, this sauce comes together in under 30 minutes and is perfect for all your summer grilling!

“This is the only BBQ sauce you will ever need, better than store bought and so easy to do!”

How to Make BBQ Sauce

For the full instructions and measurements be sure to see the recipe card at the bottom of this post.

How to Use This Homemade BBQ Sauce Recipe

Traditionally, bbq sauce is meant to go on the meat after it has been completely cooked. It isn’t really meant to be part of the cooking process. You can see this in the making of my Honey BBQ Ribs.

That said, I do have two recipes in which I use BBQ sauce as the part of the liquid for cooking, and they did in fact turn out amazing.

Can you guys tell that I have a thing for honey bbq?

Can You Use this BBQ Sauce as a Marinade?

You guys, I’m all about breaking rules. Especially when it comes to cooking. It should be a fun creative process that makes you really happy.

Generally speaking, no. You don’t use BBQ Sauce as a marinade. It goes on after the cooking has happened.

Speaking of vinegar, lets talk about it. The tang in this recipe comes from apple cider vinegar. In fact, in the 2 1/2 cups that this recipe makes, 1/2 a cup is vinegar. Plus you have the acidity of the ketchup.

That’s a lot of tang guys. I love the flavor of it. I think it balances the the sweetness and the smokiness of the other flavors perfectly. That said, if you are worried it will be too acidic, I would start with 1/4 cup, taste it and add more vinegar until you get to taste you want or 1/2 cup, whichever comes first.

How Long Can You Store BBQ Sauce

The vinegar and sugar in this recipe both act as natural preservatives, so this easy homemade bbq sauce recipe should keep in the refrigerator for up to two weeks.

Things to keep in mind:

Can this Recipe be Canned?

This recipe has a high acidity level and has not been tested with canning.

If you try this recipe, come back and let me know what you think! I love hearing from you! 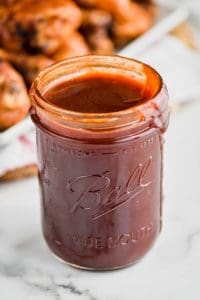 Serves: 10 servings
(tap # to scale)
Prep: 10 minutes
Cook: 15 minutes
Total: 25 minutes
This BBQ Sauce Recipe is easy to throw together and absolutely delicious! Fast to make and with ingredients you already have on hand, you are going to make this homemade bbq sauce all the time.
print pin it rate 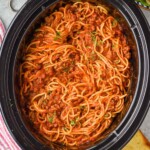 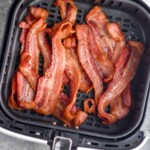 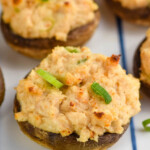